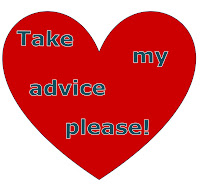 Note to self, never ask married women for dating advice. It’s like them asking me for child-rearing advice. The only thing either of us are able to do is spit platitudes and cliches at each other.

When you enter the “epically single” category, people stop being able to help you. You’ve tried it all. Playing games and being yourself. You’ve been the simpering female and the strong woman. You’ve tried being friends first. Here’s the thing with that…I don’t want to have sex with my friends. I hate it when guys put that in their profiles. Yeah, sorry. I don’t buy that crap. My friends don’t want to stick their tongues down my throat.

Back to the fundamental problem with advice: If you are in the middle of said epically single stage, you are in crisis mode and cannot think clearly.  Handing out advice is moot.  No one trusts that you know what you are doing because you are obviously failing at the dating thing.

If you are in a relationship, you forgot or don’t know what it’s like to be frustrated and confused because a guy went out with you once and disappeared into the ether….and then have that happen to you 13 times in a row. OK maybe not in a row, but only 3 non-disapparances out of 16 tries is pretty awful on the ego over the course of two years.

For the record, I’m still in, “I give the hell up” mode. I haven’t been actively messaging guys and haven’t been impressed with the few I have received. My next experiment might involve fibbing my age.

I have a theory. Guys get stuck on a number. People don’t walk around with their ages tattooed to their foreheads like they do online. I think I would get more action if men only knew the decade of my age instead of my number. I look 10 years younger than my age. And why men are hesitant to date a woman even 3 years older than themselves confuses the hell out of me. What’s 3 years? You’d date a chick 3 years younger than you…why not older?