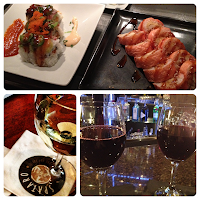 Last week, I used up my Festivus Tweetup winnings.  What did I win? A free night at the downtown Residence Inn and gift cards to Cafeteria 15L & Three Fires Lounge.

Our first stop was the bar at Spataro.  If you are not paying attention, the name of this place sounds like Sapporo, which is down the street and around the corner. Apparently, cab drivers have been known to drop people off at the wrong place.  Enunciate, dammit!  The more wine we had, the more it started sounding like Sabarro.

Appetizers were at Cafeteria 15L where we wondered if the 30th birthday party in the next room that was setting up was a surprise…until everyone left it and went to the bar.

We had a $16 glass of wine at Three Fires.  I had a gift card, so I figured we might as well splurge, right? I usually get annoyed if I spend $5 for a glass of wine.  I can get half a bottle for that!  Yes, we all know I’m cheap.

My sister insisted that she have sushi.  So we walked over to Mikuni. Sitting at the sushi bar always makes me nervous.  Who do I order from?  I hate seafood.  I tried not to make a stink face because fish stinks, but most people seem to eat it anyway.  Luckily, I was too drunk to notice the stench.  I always order some sort of chicken.  This time it was rolled up like sushi so I could look like one of the cool kids.

The best part was when we were walking back to the hotel past one of the various clubs when we saw this “lovely” gal whose shorts were so short that “her tampon string would probably show” as my sister said.  To add to her white stiletto platform booties, bleach blonde pink streaked bump-it hair, she also had the words “Carpe Diem” tattooed at the top of each leg but below each buttock.  I’m kind of impressed that she knew any Latin at all.  Pretty sure she should have gotten “Caveat Emptor” or “Enter at your own risk” instead.