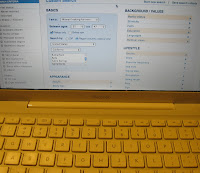 I’m at a strange point in my love life.  I’ve sort of started dating someone…I think. Well, that’s what someone said to me in a conversation the other day, “That guy you’re dating…” So I guess that’s a confirmation.

It’s that delicate beginning where I don’t know if we are exclusive or not. I know I’m not dating anyone else, but we haven’t had the conversation about it.  In fact, I can’t even remember how that conversation is supposed to go.  I’m sure I will be awkward when I attempt to bring it up.
He’s out of town, which has paused things and is triggering some of my insecurities.  I’m keeping them in check pretty well, except of course for writing about them on this blog.
But, even if I’ve jinxed the whole thing by writing about it, I did learn something from this online dating adventure.  If a guy says, “Let’s get together again.”  He’s trying to be polite and doesn’t want to see you again.  If a guy says, “Let’s go out on Monday.” He’s actually interested in you.
Of course, I’ve been burned so many times before that I’m cautious about admitting that this guy might actually be interested in me.  I’ve read about the signs to look for and I think I’ve even experienced a few with him, but my heart has been bruised so many times that I’m trying not to be overly excited about them.
What I’m trying to do is just relax.  If he wants to keep dating me, awesome.  If not, well his name goes on the list of men who I went out with but decided not to date me.
The funny thing is that I don’t know what to do with myself now that I’m not actively looking at online dating sites.  I’ve been at it for 2 and a half years.  Wait.  Is that right? Wow.  I guess it is.
Honestly, I’ve been doing the online dating thing on and off for about 10 years.  I would sign up. Go on a couple of dates.  Get frustrated and quit for about 10 months.  Then the loneliness would get to me, so I’d start the cycle all over again.
Here’s hoping that the vicious cycle is finally broken.