>All of you divorced people are probably going to disagree with me, but you know that old saying about it being better to have love and lost? Well, apparently it’s correct.

A few weeks ago, I was in an online discussion with @GirlWithMoxie about this situation. My point of view is that society pressures women and men to be married by a certain age. If you saw that a gal was almost 40 and had never been married, you would think one of two things, “She’s gay” or “Ew. What’s wrong with her?”

It used to be age 30 for women, but I think maybe society is getting a clue that some of us just haven’t been lucky enough to find a guy to stick around long enough to ask us for our hand in marriage.

Moxie couldn’t understand where I was coming from.

My friend Jen said it best, “At least a divorced person had someone love them enough to marry them.” We never marrieds can’t even say “At least we tried.” It’s not that we don’t want to try, we just were never given the chance.

Jen also mentioned that she was perusing online dating profiles, saw a guy who was 40 and never married.  She admitted that her reaction was “What’s wrong with him?” We’ve all done it.

Need more evidence? There was an article last month about this little old lady who patronized the same bank for 98 years. Within the article they mentioned that she had never been married and had no children. What the hell does that have to do with someone using the same bank for decades? Absolutely nothing! But, we as a society are so engrained with the marriage thing that familial status is almost always mentioned in news articles, resumes, and just because.

Moxie said that people regard divorcees as failures…well, maybe back in the 1980s, but the divorce rate is hovering around 50% right? It’s pretty common to be divorced…at my age. (CRINGE)  People can look at her and say you gave it a shot…at least someone loved you enough to get that paper recorded at the county assessors’ office.

On Twitter yesterday, I saw a gal lamenting her single status because her 10 year high school reunion is coming up. She wasn’t sure which was more acceptable, lying about her sexuality or admitting to being the only never married at the gathering. 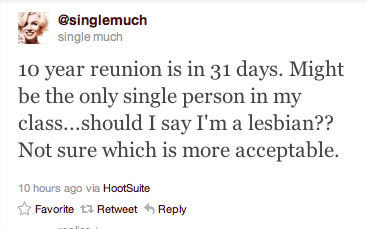 I told her to get back to me when her 20 year reunion looms on the horizon and she’s still in the same never married state…like me.

Apparently, I have ten cats, wear nothing but brown wool sweaters, and I forget to brush my hair…why else would I be single, right?

Even before the onslaught of reality shows like Say Yes to the Dress, My Fair Wedding, The Real House Wives of (Indianapolis?) and even that God awful Bridezillas, romantic comedies always ended with a couple saying “I do.” or at least the implication of it.

So, coupling up via marriage is pretty much part of the fabric of our society. There’s nothing wrong with marriage. I just hate that I feel left out and get looked at sideways for never having joined the club. It’s not my fault no one ever gave me the secret password.

In fact, it would even be more socially acceptable for me to lie and say that I think marriage is an outdated concept.

But screw that…there’s nothing wrong with me.   I’m off to go wash my brown wool sweaters.

7 thoughts on “>The "Never Married" stigma”