In two days, the California State Fair begins.  Am I the only one who starts hearing that song Teen Suicide, Don’t Do It! whenever the website (BigFun.org) is mentioned? Seriously, did no one in the planning meeting raise their hand and say…oh by the way…There’s this movie from the late 80s you might want to watch first.

Speaking of references…
Do you see the big golden bear clutching the purplish star? His name is Poppy. A guy I dated thought the bear on the California State flag was also named Poppy. Try as I might to gently convince him that he was wrong, he insisted on it. Fine. Yes, in 1846 John Fremont and his band of merry pioneers invaded Sonoma which was later known the Bear Flag Revolt with Poppy happily sitting on the California Republic flag. I should have seen that as a warning to ditch him right then and there.

Regardless, I’m looking forward to the deep fried goodness and the Counties Exhibits. Yes, I’m a nerd, but I’m sure you all knew that. Plus, the county exhbits are all indoors, so it’s a great way to escape from the oppressive heat that ALWAYS happens at Sate Fair time.

By the way, Solano County is probably going to win again this year. They always put together a little walk through hut that reminds me of the Nut Tree. All the other counties just can’t get their shit together and create a decent exhibit. I mean look at what Los Angeles County put together in 2006. We’re good at sports? 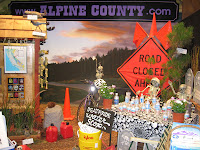 And what is going on in Alpine County? Road work? Ok, the Death Ride thing is pretty funny, but it looks a little…well just look. 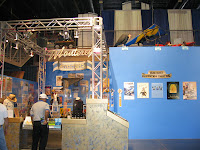 Monterey County obviously phoned it in during the year of this photo.  Isn’t this the county where Steinbeck wrote a famous book or two?  And isn’t there some beautiful golf course there?

Sacramento County had everyone one walk through a big tree one year.  Come on Sacramento!  You host the thing.  The least you can do is try and make a little bit of an effort to impress the visitors.