>The good news is that I’m not going blind.

The bad news is that apparently I’ve been having migraines for the past two weeks. The thing is that I haven’t noticed any major headaches. I’ve just had this weirdness happening in my vision.

Glares have been my trigger. I’ll see a bright light reflecting off some surface and suddenly this spot appears in my vision. Except, it doesn’t go away when I close my eyes.

When I told my optometrist this, he said, “Well then it’s not your eyes…”

That’s when he told me I’ve just been having migraines.

The spots in my vision then expand to these zigzag blue starbursts which impede my sight a little bit… Enough to annoy the shit out of me. 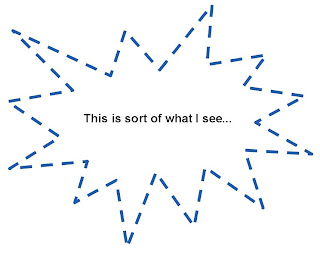 They have been happening enough to scare me into going to the doctor. He actually told me that some people even go to the emergency room when they get these migraine auras, which apparently isn’t the name of the newest Disney princess.

The thing is that the actual headache wasn’t all that bad (knock on wood). It was just a dull sort of ache. I was freaking out about my vision too much to really notice it. Allegedly, there are a few other things that could occur like nausea and a heightened sense of smell. No thanks to either!

The Mayo Clinic website said that difficulty with speech or language can be a symptom, but I’ve always got a problem with both of those things. Anyone who’s read my blog can attest to that! Plus, I’ve always had a little dyslexia to contend with, so I wouldn’t know the difference anyway.

So, now I have to get more sleep and cut down on sugar. He said to cut back on the caffeine too, but I really don’t drink much of that. One cup of coffee a day can’t kill me. It’s the sleep and stress that are making me see these auras. I know it.

1 thought on “>The eye of the beholder”