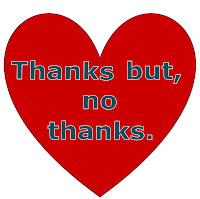 Yes, I complain about dating. It’s a huge source of frustration.  One minute you think things are going well and the next…you run for the hills or he runs for the hills, so I vent about it here on my blog. Of course, it’s not all bad, otherwise I wouldn’t be doing it. There’s the hope of something fun. I have met quite a few interesting men. None of them have worked out. Mostly because they decided to pursue love elsewhere, but sometimes, albeit rarely, I decide to change my course.

What makes me decide that someone is not dating material? Here are a few of mine in no particular order, of course.

1 thought on “>Deal breakers, we all have them.”