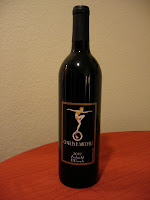 After the busy week I’ve had, I need something to relax me. Normally, I’m not much of a drinker.  Sure, I imbibe from time to time, but in order to placate my nerves alcohol is usually not the first thing that comes to mind.  It’s candy…chocolate to be specific.  But, since chocolate is like my heroin, I’m trying to avoid it.

Instead, on Monday I opened a bottle of red wine.  I just love wine. Maybe it’s just the culture in California, but there is something about sharing a bottle with friends and family.  It’s nice to drink alone too.  You don’t have to mix it with something.  There’s no need for garnish.  You don’t have to keep it chilled, usually.  You just have to protect it from the elements.

The other day when were discussing effects of radiation, my uncle mentioned that when my grandfather worked at a refinery, someone told him to have a glass of red wine every night because they thought it helped remove the toxins from the system.

Of course, I had heard of the vague health benefits to be had from red wine, but I didn’t realize that 40 years ago people were aware of them.  Because I’m a doubting Thomas, I had to Google red wine health benefits just to see if some of the home remedy had any merit.  Apparently it does.  This article lists quite a few possible benefits:

The breadth of benefits is remarkable – cancer prevention, protection of the heart and brain from damage, reducing age-related diseases such as inflammation, reversing diabetes and obesity…

So instead of a that Hershey Bar I crave on a nightly basis because I’m substituting it for much needed love and affection, I should grab a glass of Zinfandel. It’s good for me.  Cheers!