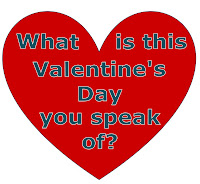 What really pisses me off is that I’ve just never had a Valentine.  I just want to try it out once.  I’m sure it’s awful.  Everyone seems to think so that I talk to about it, but I’ve never had the “what should I get him” pressure.  I’ve never worried about how to be nice when accepting a crappy gift.

At this point, a crappy gift would be nice.  At least I’d have something new to write about instead of the usual woe is me stuff.

Seriously, does anyone who isn’t a 10 year old little girl actually enjoy Valentine’s Day?  The last time I really enjoyed it was when the whole class had to hand out mandatory Valentines.  My desk was covered with Smurf, Batman, and Barbie Valentines.  Of course, so was everyone else’s.

This isn’t really good preparation for the real world.  It’s rife with disappointment.

In the subsequent years, I watched girl after girl get those carnations sold by the band or the Key Club as a fund raiser and delivered during 4th period.

Then again, last year was nothing but disappointment.  Remember when I was on Sacramento Magazine’s Single in Sacramento web page? Yep. No dates from that one, but last year was a pretty barren year.  Maybe this one will be better?  One can only hope.