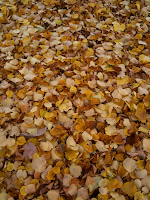 Be warned, fun runners. The storm that blew through Sacramento last weekend brought down an epic amount of leaves. Since you probably already know that Thursdays are trash day in East Sacramento, street parking will not only be impacted by the 2 to 3 cans at the curb, but also piles of leaves the height of a toddler.  If I were you, I’d park at Sac State.  But that’s probably a cluster and a half too.

As of this writing, it’s supposed to rain, which I assume means some of you will be passing on the holiday tradition of running through my neighborhood in the freezing cold. If it doesn’t rain, you will be treated to a beautiful sight. The leaves that are left in the trees are in full color.

I will try to post pictures of any funny hats, balloons or the guy with the giant sound system on the trailer behind his bike.  How he gets into the crowd, I don’t know because bicycles aren’t allowed.

As far as I can tell, there isn’t a hashtag.  I’ll be using #TurkeyTrotSac because the official Turkey Trot is supposedly in Folsom and #RTFTHSac just doesn’t roll off my fingers.  Although I guess cut & paste is faster than everything else.