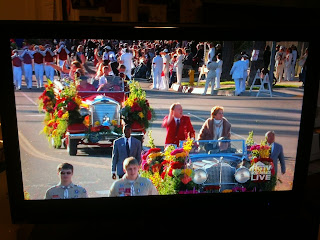 Every New Year’s Day, we watch the commercial free broadcast of the Rose Parade on HGTV. Except this year. It’s not on New Year’s Day. It’s on today.

I remember when Paul James from Gardening by the Yard was the host. Apparently, he’s too quirky for HGTV now. In fact, I’m a little sad at the direction the channel has taken. It used to be this silly, quirky place on the dial where you could learn about decorating your house or taking care of your yard. Now it’s all about real estate. Lame.

Back to the parade, it’s all about the floats. Sorry horses and bands. You are just filler in between.

I’m watching this year’s broadcast and going, what the hell is this crap? A musical opening? That’s what I hate about the Macy’s Thanksgiving Day Parade. Not enough actual parade too many musical interludes.

Ah, the Wells Fargo float. Where are the Occupy protestors? I know where they should be…protesting where the rich people are not where the 99% are trying to recover from a hangover. Yes, you know you people have a hangover today too.

Remember when the B-2 bomber was a secret? Now it’s probably outdated technology like a VCR. I mean why else is it showing up flying over Pasadena as part of the Rose Parade?

This thing is two hours long. No way I’m watching the whole thing and writing about it. You wouldn’t want to read all that crap anyway.

I missed the first float. Kenny G was on it, but I have no idea what it was because I was busy typing. I should probably do that when there’s a horse break.

Cal-Poly has a float? I thought public universities were struggling for funds. I hope that thing was financed by donations from alumni. 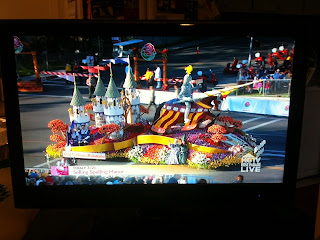 Am I just too tired or have these floats always been confusing? This one has a garden theme, but there’s like some flashy stars on the end.

Trader’s Joes float had something to do with hot lava? But it’s a red wagon made up to look like a pirate ship… did I misunderstand the announcers?

Seriously, are the parade organizers even paying attention to the ideas or are they just too busy to read through the papers describing the floats. I would hope someone has some oversight on that.

I’m shocked that Oregon doesn’t have fifteen different versions of their float in this parade…one for each of their uniforms.

Another thing I’m shocked about? We actually get this parade live instead of tape delayed.