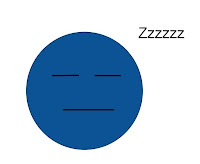 Today I slept in until 9:00 am. That’s right 9:00 am. Depending on your lifestyle you had one of two reactions to that statement. You either went, “I’m so jealous. I haven’t slept in since the kids were born.” or “Wow. That’s hella early. I barely can deal with my hangover before 10:00 am.”

During the week, I have to be up by 6:00 am or I don’t have enough time to get ready for work. The first thought when I wake up is almost always, “I want to go back to sleep.” This repeats in my head like a chant for the next 30 minutes. I’m groggy and grumpy until at least 7:30. My mornings are spent coasting around on co-pilot.

During the weekend, I usually have no plans and unless I do, I refuse to set the alarm. Normally, I still find my eyes opening around 6:00 in the morning, but I make myself stay in bed at least until 7:00 just because I can and really have no reason to get out of bed before that.

Why don’t I stay in bed longer? I start getting that overslept feeling. I have it right now. Super groggy and yucky combined with a little guilt at letting the day slip away for no good reason. Plus, I really need to stay in a regular sleep pattern or else I’m totally screwed during the week. Sure, it would be great to loll about in bed all day, but come Monday morning I will be paying for it when I only had 3 hours of fitful sleep. Then it will probably take me a good three days to get back on track.

I’ve always had problems sleeping even when I was a kid. My brain just won’t shut off at night unless I trick it with sleep cues. Even now, I still have nights were I lie there alone fretting about the time creeping by with my eyes wide open and slumber far, far away.

Some of my weekday morning chant comes from psychological stuff. I don’t want to go to work. Don’t get me wrong. I love my job, but I probably need a real vacation. You know, one where I don’t check email and it lasts for more than a 3 day weekend. I tried that over the holidays and it backfired on me. I didn’t have plans to go anywhere and hangout with anyone, so I was bored within 2 days. Of course, I think I was also PMSing, so the solitude only exacerbated my depression.