What’s the point of these statistics? I was reading a story in the Sac Bee about people who want to build in flood prone areas and think the 500 year flood is something we don’t need to worry about. Please look at this lovely graphic from the Bee: 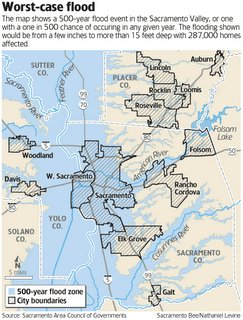 On the 500-year map, multiple levee breaks would put many communities and highways under water. In some places, that water would be only inches deep. But the map brought home the consequences of inaction for the gathered city and county leaders, most of whom depend to some degree on aging, unstable levees

Please note that most of Sacramento is flooded. As frightening as that paragraph/graphic is, the following is what really got my ire up:

A revised growth scenario, called the Blueprint, would place even more new homes – 315,000 – in flood-prone areas. Approved by SACOG in 2004 but not yet embraced by all local jurisdictions, the Blueprint is designed to prevent sprawl by concentrating growth in urban hubs. It would save 36,000 acres from development, partly by placing 67,000 more homes in urban areas at risk of flooding.

Flood risk was not considered when the plan was developed.

How the hell do you not take flood risk into consideration when developing a growth plan in the Sacramento area? That’s like San Francisco not taking earthquake safety into account when putting up a new building. Just because the odds look long, doesn’t mean it’s not going to happen. Those 13 people who won the Powerball this year will tell you that all day long.