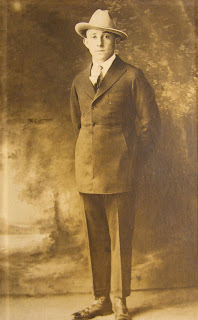 As many billions of people as there are in the world, it’s amazing when someone you’ve been looking for finds you.  Over the past year, two long lost relatives have found me through the Internet.  One found me through ancestry.com  Some how, I’ve become the family genealogist.  I’ve always been fascinated with my family’s various branches and where they might lead.

On my Dad’s side, my roots extend back through California’s history into what is now Mexico and into Spain.  I am directly descended from people who founded Santa Barbara, Los Angeles, and the Presidio at San Francisco, as well as a few missions.  I’ve ancestors on both the De Anza and Portola Expeditions, which is probably why I felt such a profound connection to the Bay Area.  Walking along that bluff in Pacifica, I can imagine my ancestors exploring that windswept foggy coast.

But, I was talking about closer relatives still living.  It’s nothing short of a miracle that this long lost cousin found me.  I didn’t even really know her name.  I knew who her father was, how he died, but never knew what happened to her or her mother.  My Dad’s family had been torn apart by death.  His father died from the shock of the news of that one of his sons had been shot down over Korea and was missing in action.  My Dad was only a toddler at the time since he was the progeny of a second marriage and it was his older half brother who was lost in the Korean War.

My cousin saw a photo of her long lost pilot father on my family tree and contacted me about it.  This photo I dredged up from an Internet search while trying to find any info I could on various relatives.  At the time, it seemed inconsequential.  I wasn’t even 100% it was my half uncle.  Can you have a half uncle or is it just uncle?

My other cousin found me on Facebook.  How she found me, I still don’t know because I thought I had my privacy settings up pretty high.  I get emotional at the memory of seeing her friend request and subsequent message.  A profound happiness engulfs me and sends tears to my eyes.  I had all but given up looking for her.  I knew there were ways to look for her, but I didn’t have the time nor the money to invest in them.  I know I had looked for her on Facebook at some point, but she hadn’t signed up yet when I did the search.

What did I learn from these two events?  People will show up in your life when they are meant to show up and if something is meant to happen it will.  Now if I could just remember that and apply it to my love life…