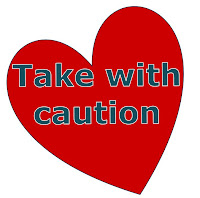 Lately, I’ve noticed a few guys putting disclaimers on their online dating profiles. I’m still not sure that this is a good idea. Although, I might include one that says, if you are not in fact, single in the legal sense of the word, keep moving along. Get back to me when you have filed your papers with the judge that declares you freedom to date me.

Seriously, I can understand emphasizing the fact that you don’t or do want kids. That can be a deal breaker for some people and it’s better to be up front about it in the beginning of the relationship than find yourself two years in facing a marriage and the possibility that you really will have to pop out a few kids to keep that guy happy.

What I find odd are they guys who state what should be a given. No drama, no drugs, I want a serious relationship. Oh yeah? Well you are dating women right? ALL WOMEN WANT A SERIOUS RELATIONSHIP…they just might not want it with you.

If you are ultra religious, you should definitely make that disclaimer…so I can stay away from you. Bible thumping is not my bag, baby.

The best disclaimers are the ones that say, “My subscription expired…” Sometimes they will try to hint about how to get in touch with them if you are completely amazed and enamored by their words & blurry photos. Oh what’s with that random 9 followed by a 1 two sentences down and a 6 four words later. Pretty sly there, Da Vinci. I don’t think I need Tom Hanks to help me break that code.

My disclaimer would be pretty bad. Want to know what it would say? Here it is:

Please don’t lie about your age, height, or whether or not you want to have kids…because in all honesty, I don’t. I like being free and happy, don’t you? I prefer being able to sleep, have sex and travel whenever I want, but I’m probably just a little crazy. Don’t say you like to hike if you would really just go to the movies or watch sports. I hate hiking. It’s totally pointless. And don’t get me started on camping…that’s what you do when all the hotels and houses have been crushed in an earthquake. I’ll keep my attached bathroom thanks. If you like “being active” by all means, get your ass outdoors and go for a jog. I’ll be doing yard work or cleaning the house while you ride your bike around for no apparent reason whatsoever, Lance Armstrong. But if you would rather do something productive like fix a car instead of going to the gym, I’d rather read about that…in fact, a guy who can fix my car is way hotter than a guy who runs alot.  Actually, I don’t care if you jog, run and hike.  If you like it, great!  Just don’t expect me to tag along.