You want to know why I’m so annoyed by dating? Because it mostly sucks. Anyone who’s read this blog for the last few years knows that I have been out on more first dates than I care to remember.

Every rejection makes me baffled.  Apparently, all of the men I’ve gone out with think I’m so ugly & annoying that they can barely tolerate me for more than a few hours. They don’t even know me!

When I’m on a date, I do constantly talk about how much I hate men, how my execs suck and how I’m so eager to have children. And if you believe any of that you’re not paying attention. 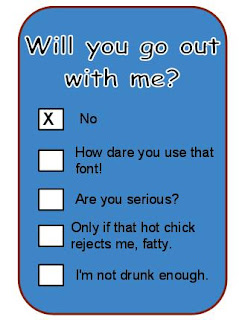 As all bad romantic comedies and dating advice tells us, I avoid these topics like the plague. Also? I don’t have crazy exes. I don’t give a shit about having kids. And I’m rethinking the whole idea of marriage. I don’t want a guy getting his hands on what little money I have!

So, I’m not perfect. I probably don’t flirt enough or the right way. I have self esteem & respect. I act like a well adjusted adult instead of a psycho hose beast.  I don’t need to be rescued.  I just want companionship.  And don’t tell me to get a dog.

This rejection happens to my single friends too. Every man who treats my friends like shit makes me relive the pain I’ve felt in that situation.

You don’t even see a warning sign. There is no gut feeling telling you, “This guy is a douchebag! Stay away.”

You get excited because he seems interesting & normal. You genuinely had a good time on the date and want to get to know him better.

The worst? When he says he wants to go out with you again then doesn’t follow through.

And I don’t mean he says it when you are still on the date. EVERY guy says that. It’s meaningless.

It’s when a guy says it after the date has been over for hours or days. He had an out. He could have just disappeared into the night like all the others. There’s no reason for him to be nice and say “Let’s go out on Tuesday.” He’s not awkwardly trying to finish the date…it’s been over.

So, yes, I’m still bitter because all the men I’ve gone out with couldn’t even be bothered to give me another chance. OK, a few of them did give me one more chance, but most of them did not.

Here’s the thing about first dates, guys. They are basically meet n greets. They are tests to see if the person was lying about anything & if they are sane. Clearly, I’ve not passed this litmus test. Then again, I’m probably the only one who uses said test.

1 thought on “>Online Dating Chronicles: It’s not me, it’s the process”