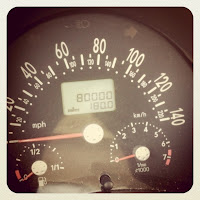 Personally, I think these penalties are weak. Let’s make the initial fine $1,000 and see how many people still chat on their phones while driving. I saw at least 10 people breaking that law while driving down to the Bay Area and back this weekend.

If municipalities want to increase revenues, I say hike up the fines for all kinds of moving violations. If politicians are skittish about increasing taxes to help out with various budget issues, they should get behind making people obey the law and increasing all the penalties. Fines will become taxes on the stupid.

Look at our freeways. How many people do you see littering? Barely any. Have you seen the penalty for throwing your trash out of your moving car on I-80 in California? That’s right, it’s $1,000 almost three times the fine for talking on your phone and driving with only one hand.

Maybe it’s just me, but shouldn’t the penalty for possibly causing a car crash and killing or maiming someone be higher than mere littering?

Granted, I’ve never heard of anyone actually getting a litterbug ticket, but maybe that’s because the penalty scares people straight.