>Why is it such a big deal for women to like having sex? After all these years, society still makes us into either virgins or whores. Maybe more understated than in previous generations, but you can be damn sure it’s still there.

Point of fact: I’m a nerd who doesn’t know how to flirt with a guy, but I have been trying to practice honing my poorly developed feminine wiles. I’m also tired of being a Pollyanna. Since I’m going to be alone for the rest of my life, why not just enjoy whatever man catches my fancy? Right? Oddly enough, the other day I found myself in a situation where I was exchanging rather dirty messages.

So, being the nerd that I’ve previously stated, I googled how to write a dirty text. Also being the nerd that I am, I know that nefarious websites might be lurking in the result set. I clicked on a site that I’d heard of before that caters to women. Um…these messages were FAR from dirty. They were ridiculously clean and not very sexy… 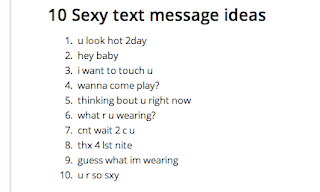 I mean are you kidding with this? OK, it does technically say “flirt”. But, the title of the article, “Text It to Me Dirty, Baby” is entirely misleading.

Can’t an intelligent, well adjusted woman say filthy things in private and not be judged? A man can do it and no one blinks an eye. I do it and suddenly I’m a horrible person.

Regardless, in a world where there seems to be more written words than ever before, why can’t I find a decent website with the writing examples I need?  Maybe I just need to adjust my search terms…

2 thoughts on “>Double Standards…I’ve Had It With Them!”