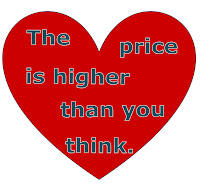 Someone asked me what the protocol was for getting off of an online dating site. Yeah, like I would know that.

I’ve been doing this online dating stuff for longer than I can remember. If I had even an inkling that a guy I liked wanted to date me exclusively, I would remove my profile posthaste.

I told him if he wants to quit, then quit.

Really, people it’s not brain surgery, rocket science or even new math. If you like the person you are dating then focus on them. Don’t give other unsuspecting people false hope because you are afraid to get hurt again. You’re going to get hurt again. It’s inevitable.

I keep coming back to the online dating because I feel like I have no other alternative.

If anyone was smart, they wouldn’t bother with dating and figure out a way to be happily celibate, but those damn hormones keep screwing that all up.  Like I’ve always said, puberty ruined my life.

Oh, but there are alternatives to the online dating scene you say? If you tell me to get a hobby, I will punch you. Probably not too hard, but with relish.

Do you know how many people I know that have met their significant others through some mutual hobby? That’s right ZERO. More people meet at work or randomly in a bar.

Sitting in a bar alone still scares me. Sure, some women I know have done it and landed a date, but the idea of being alone in public is just not attractive to me. I get really annoyed and angry. You think you’ve seen that side of me on this blog? That’s just a mere shade of what comes out. Of course, I internalize it into tweets or ideas to write about on my blog, but it doesn’t help to attract me to talk to me. Plus, being in a crowd scares me. I don’t do well and just get this overwhelming desire to flee.

I can’t relax when I’m alone in public. I have to be on my guard against creeps and freaks. You’ve read the headlines. They are everywhere. Someone might steal my purse or worse, my iPhone.

And if it is that easy for you, I’m sorry, but I kind of hate you.

2 thoughts on “>There aren’t any refunds in dating.”