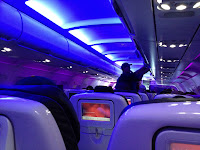 Here’s the thing: Southwest gets it while others just don’t.

The “it” is the bag check fee.  Paying an extra fee to check your bags is ludicrous. Just pad it into the damn airfare.

If you call the fee out, no one is going to check a bag.  It makes boarding and unloading a plane too damn long.  I started writing half this blog post while waiting for my plane to unload this afternoon.

On a Southwest flight, I have a personal bag under the seat in front of me and that’s it.  I just have to slide out and stand up to walk off the plane.  I don’t have to frantically try to remember where my carry on is stowed and then try not to knock someone in the noggin while trying to get the damn thing down.  Of course, I have to freak out about checking in so that I get an A boarding pass instead of the dreaded B or C, but that’s much easier to handle than watching 70 people struggle to not annoy another 70 people.

Things like purple mood lighting & in-seat entertainment are just a way to rationalize that stupid baggage fee.  “See how great this airline is?  You are in luxury now!”  While these are nice, and I’m sure my checked bag would appreciate their use, they are unnecessary. My phone can keep me company or even an old fashioned book. Most people carry something with them to pass the time.  Heck, I saw one guy reading a newspaper on board.  What’s that all about?

Granted, I do enjoy the in-seat charging and being able to see where the plane is on a google map in front of me is cool.  Also, a really long flight, like to Europe or Australia might be nice to have a large option of entertainment available, but even across the the U.S., an on demand movie is not worth the $8.00.

Because let’s be honest, the non-stop flight across the U.S. is pretty much non-existent these days.