>Previously on Limit Reached…I cried because I was stressed out.

Still in a crappy mood the next morning after my emotional breakdown and waiting for the coffee to kick in, I was reading a tweet from a local blogger: 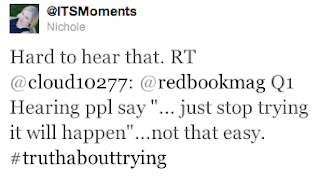 I could empathize with her. My dating frustration was at its boiling point. For years people have been telling me to stop trying so hard.

The coffee kicked in, my brain went into gear and I realized that I had no idea what she was talking about, so I nosed through her timeline.

She was in a tweetchat about infertility.

Instantly my go to reaction is “Why do women today put so much pressure on themselves to get pregnant? It happens millions of times a day to billions of people. If they would just relax…”

A sense of relief washed over me. I felt like I did the first time I successfully drove a stick shift. I finally just got it.

One of my twitter/blog friends had said something similar to me the other night and it pissed me off.

He was being nice and, of course, was right, but I wasn’t in a mood to be fixed. I wanted empathy. I wasn’t ready for a solution. I needed that emotional release.

So, I’m taking my advice to the infertile and a version of Nick’s and just relaxing. Relaxing sounds much easier than not thinking about it, but it is the same thing…I think.

4 thoughts on “>Another dating epiphany”