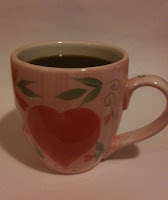 As you may or may not know, I’ve been drinking coffee since I was a kid.  Before you gasp at my parents’ possible negligence, calm the heck down.  I didn’t drink it every day when I was 8.  It was only on the weekends and was only one cup for breakfast like my Dad.  My sister partook of this ritual too, but doesn’t seem to have the same appreciation of coffee as I do.  Well, she has her own way of enjoying the bean.  She drowns it in milk and/or flavored creamer.  Personally, I’m not a fan of milk.  I like my coffee sweetened and strong.

One thing, I never considered myself a coffee snob.  OK, I really don’t like Kona coffee. It tastes like dirt to me, but I’ll pretty much drink coffee from anywhere. Yes, even McDonalds and the gas station.  Yesterday, I realized that doesn’t mean I enjoy it.

A good cup of coffee is a special thing and I need to get more of that joy in my life.  I’ll confess.  I’ve been cheap when it comes to my weekend morning cup of joe.  Yes, I’ve been drinking Folgers.  Stop gasping.  It’s not that bad.  It’s not great, but it’s not that bad either.  At work, I splurge and buy Peet’s Major Dickason blend and it’s really good.

The thing is that I’m tired of drinking so-so coffee at home.  It’s time to spend the money to get quality.  Now, I’m faced with the problem of where to find said bean in Sacramento.  The selection at grocery stores in East Sac seems to be pretty lame, but I haven’t really taken the time to really look at it.  I was too busy being “frugal”. I’m not sure I’m ready to travel all the way out to West Sacramento to visit the Nugget out there on a regular basis just to open up my choices.  I suppose I could be hipper than I actually am and go to a local cafe that roasts their own beans, but is a good cup of coffee worth that much trouble?  If there’s parking there, I guess I at least have to try.

4 thoughts on “>Coffee is more than an addiction”