>Don’t tell anyone, but there are some really great wineries not far from Sacramento. Just a short drive up Highway 50, there are some hidden gems. Last night, I went to the Tour de Mourvedre kickoff at the El Dorado Hills Welcome Center. 10 different wineries were in attendance pouring, Mourvedres (of course) as well as few of their other libations. What is the Tour de Mourvedre? This Independence Day weekend, you can drive around El Dorado County and taste at these wineries. Specials and pairings will be offered. Tastings are usually free, but it would probably be nice of you to buy a bottle in return.

Haven’t been adventurous enough to go wine tasting? Let me show you what it’s like.

It will probably be crowded, but that’s OK. Everyone is there to enjoy themselves, much like they were last night. You will walk up to the people at the bar pouring the wines. Don’t be scared. They want you to try their product. Why? Because they want you to buy some. Here’s a little secret: Most people don’t know diddly squat about wine, so relax and enjoy. 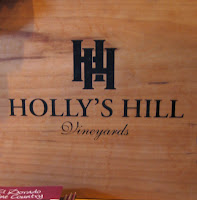 Holly’s Hill was pouring the El Dorado Patriarche, which is a blend of Mourvedre, Syrah, Grenache & Counoise. I’ll admit, I’ve never heard of that last grape, but it didn’t matter. It tasted lovely! I’m a big fan of blends. I actually have a bottle of Roussanne from this winery. It’s in the wine area on my kitchen counter. I’m classy like that.

If you’ve never been to this winery, don’t go. It’s fabulous and I want it all to myself. The view is spectacular. The grounds are lovely. Seriously, don’t go. 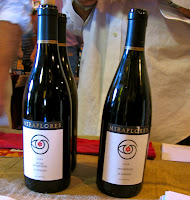 Miraflores had some 2009 Estate Mourvedre. It was tasty. I’d never been to this winery, but apparently, it’s near Holly’s Hill, so when next I venture, I will be trying them out.

Confession: I’m not really sure what Estate means on a bottle of wine. I think it means all the grapes came from the same place (an estate if you will), but I’m just guessing. 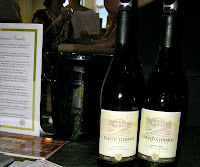 David Girard was pouring a 2008 & 2009 Mourvedre. Honestly, I don’t remember which one I tried, but it was heavenly. I haven’t yet been to this winery, but definitely want to check it out on my next tasting journey.

Sierra Vista had, you guessed it, a Mourvedre! Of course, this was good too. I swear. I paced myself. Sometimes what happens after a marathon wine tasting session is that you not only get tipsy, but all the wines start tasting the same. I made use of the spit bucket. Is that what it’s called?

Next up? Findleton. Another new winery for me. Tasty wines, and fancy labels. Notice how one is upside-down in this photo? Yeah, I just noticed it this morning. I also enjoyed the neat trick the gal used to hold the corks. I’ve only ever seen one other person pull off using the foil to create a cork holder like that. 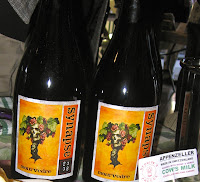 Synapse was pouring a pure Mourvedre. At least that’s what someone asked the gal behind the table. I don’t really know the difference, but it was good. That cheese was also good. They picked it to pair with the wine and it did taste great together.

Mt. Aukum had a wine called En Fuego. Love the name! Someone next to me asked what that meant. I tried not to look at them like they had just stepped out of a flying saucer.

Beemer’s Winery is apparently under going a name change to Garnet Sun Winery. A winery by any other name has wine that tastes just as sweet…or dry. Apologies to Shakespeare…  Whatever, the Mourvedre they were pouring was good. They even had a Barbera, Primativo & Cabernet Franc too.

Finally, we have Crystal Basin Cellars. The guy pouring the wines told my friend Margaret that she should be able to taste notes of white pepper in their Mourvedre. Intrigued, I had to try it. I almost never taste the flavors the pourers say is hidden in their wines. This time, I could taste something peppery. Honestly, I don’t know the difference between white & black pepper. Pepper is pepper.

2 thoughts on “>Rocking the Mourvedre Tour”