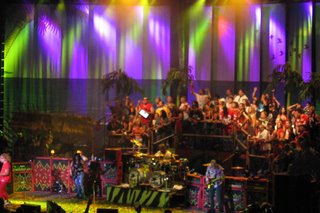 If anything, Sammy knows how to throw a party. He had a bar onstage as well as a gang of fans each with those plastic yard drink twinges. Please note the guy on the right, swaying to the music: 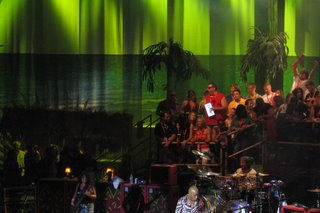 Michael Anthony was there and he did a bass solo, which I wasn’t into, but he did a killer job on Runnin’ With the Devil. I’m not into the whole Van Hager thing, but I do enjoy sauna’s solo stuff. Say that three times fast. Of course, I enjoy his work in Montrose too.

Tesla opened up and did a great job. It would have been nice to hear Edison’s Medicine, but they only had an hour to play: 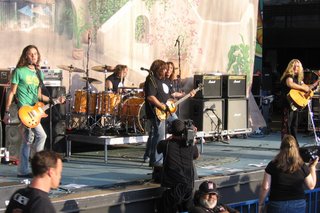 That security guy in the hat took his job WAY too seriously. Why he even bothered to sit is beyond me. He was jumping up every twenty seconds telling people to get out of the aisles, checking tickets, and assisting the drunks back to their seats. Dude, it’s a bunch of people in their 30s and 40s. They aren’t going to be rushing the stage like a Who concert. Most of them don’t even want to stand up while the show is going on.

3 thoughts on “>It’s your one way ticket to midnight”