>This morning, I headed to Target with visions of sugar plums dancing in my head. Target is a dangerous store for me even without being infused with holiday cheer. So, as I was browsing throw the seemingly ever shrinking Christmas section, I decided to buy some candy canes. 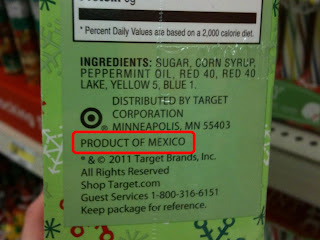 I have this rule. If I won’t visit a country, I won’t buy food from it.

So, I looked at the box of candy canes to see the country of origin: Mexico. The same thing on box after box…except for the Sour Patch Kids. They were made in China. Personally, I just don’t trust the infrastructure in those two countries. And before you start yelling about how food is inspected as it enters the country, might I remind you of the various governmental cut backs? Do they really have the manpower to inspect a decent percentage of the shipments? How do I know they are really using the ingredients stated on the box? Remember when candy with melamine was in our stores?

Hasn’t anyone one seen the How It’s Made or Unwrapped where they show a candy cane factory in the US. Why can’t I find those canes? Heck, I’d even buy them if they were made in Canada or pretty much anywhere in Europe. Australia would be fine too, but I think the shipping costs would jack up the price of the candy too high.