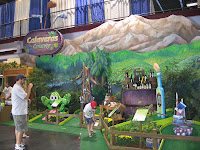 You know what’s the best part of the California State Fair?  It’s not the food, it’s the County Exhibits.

Wine was a central theme in a majority of the counties.  Seriously, I had no idea that Calaveras County had any wineries.  Frog jumping, sure.  Apparently, they have golf too because look at the interactive setup they have in the photo.  A kid can get a putter from the person manning the exhibit and try their hand at some mini-golf. 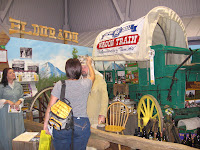 El Dorado county had a mountain man and a pioneer lady hanging out in their booth.  I kind of enjoyed that they had people dressed up to catch the attention of on-lookers.  This lady got a little too interactive if you ask me… I wonder if she had some of the wine? 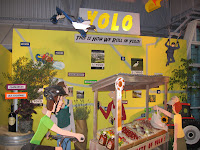 Yolo County’s theme was “This is how we roll in Yolo.”  What?  I don’t get it.  I guess there’s a bunch of stuff to do in Yolo County.  Odd, but I didn’t notice a mention of the River Cats as rolling in Yolo. Maybe I just missed it because I was distracted by the yellow in Yolo. 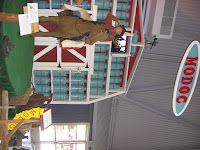 Thank goodness Modoc County included a little map showing where that county is in the state because I honestly couldn’t have picked it out.  I kind of wish all of the counties had done this…while I know about Calaveras County, I’m not real sure where it is…exactly. 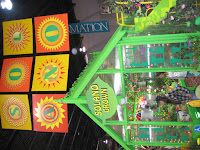 Solano, you disappointed me this year.  What’s with this greenhouse? I mean what happened to the Nut Tree like goodness?  No one wants to look at plants.  Didn’t you get the wine memo?  I know for a fact that some pretty good wineries reside in your county.  Why didn’t you promote that a little more? 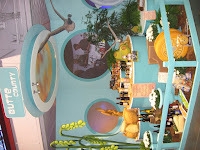 I kind of like the styling of Butte County’s display.  It reminded me of something from a Hanna-Barbera cartoon.  It was a funky, retro-future vibe.   I half expected George Jetson to pop out from behind the giant wheel of cheese.

Maybe Orbit City is located Butte County and we just never realized it.  They are only 51 years in the future! 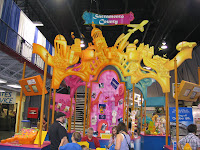 I’ll be honest.  When I first saw Sacramento’s booth, I thought it looked like an acid trip gone awry.  My mom thought it was interesting.  I was just appalled.

I was so distracted by the pretty colors that I couldn’t even see what was going on in the county.  Are we the capital?  I couldn’t tell with the hodgepodge of grooviness dancing in front of me. 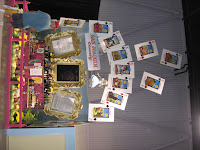 San Joaquin County had an Alice in Wonderland theme, which I didn’t even notice until I got home and looked at my pictures.  I do applaud them for trying to do something different theme-wise. 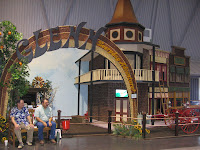 I thought Glenn County’s display was kind of cute.  I have no idea where this county is on the map, but I think it’s sort of nearby.  Either way, I liked the theme park vibe of the Victorian building.  The guys manning the booth looked bored out of their minds.  Then again, maybe they weren’t officials…they could have just needed to sit down for a moment. 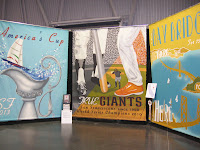 San Francisco clearly phoned it in this year.  What’s up with the tapestries?  There is so much history, culture and beauty in San Francisco County that I am severely disappointed in this display.

Why even bother?  And you know what?  I don’t care if the America’s Cup will be in town in a few years.   And touting the Bay Bridge?  Really?  Need I remind you that it broke in 1989 and it’s still not fixed 22 years later? Who gave this a silver ribbon?  Basically it’s just a thanks for bothering to show up award.

Southern California didn’t even show up for the State Fair this year.  I don’t mean in the competitive sense. I mean in they actually didn’t submit anything to the County Exhibits.  Look at this form below. The dark counties submitted nothing. 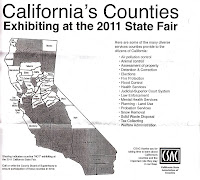 This year, you can vote for your favorite counties.  Just stop by one of the information booths where the County Exhibits are and pick up a form.