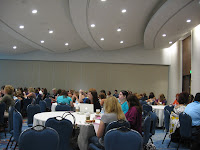 Tardiness is a major issue for me. I am not usually the one who is late. I can’t stand it when someone or something is late. It was rampant at BlogHer. According to a few veterans, this is a common occurrence.

All was not frustration with keeping on schedules. At this huge blogging conference, I met some really great women. Some I randomly met in the shuttle from the airport to the hotel.  Some I sat next to in a session.  Most of them, I had been chatting with via their blogs and Twitter for a few years. Putting names to faces was great. The best part was realizing that in person, these women were fabulous. Their online personas were only a shadow of their true selves which were even more interesting and engaging. I had some great laughs and deep conversations (even while buzzed).

The Expo Hall didn’t disappoint. I got some interesting “freebies”. I put that in quotes because really, nothing is free.

The sponsors want us bloggers to talk about the orthopedic inserts that Dr. Scholl’s handed out and the new toilet cleaner that Scrubbing Bubbles gave away. That was just a coupon. I’m not dragging a step on toilet cleaner contraption on the plane. In fact, I got so much swag, that I think I might dedicate a whole post or two just to showing you what I had to lug home.

The sessions were pretty…meh. Disorganized and noisy were two words I kept thinking about while trying to figure out how the topic described in the outline matched up with the panelists. It seemed like the topic was nebulous and mostly a reason for others to promote their blogs or PR companies. Also, what’s with all the babies?

Seriously, I was having flashbacks to Sunday Mass. Where is the cry room? Why would you bring an infant to a conference? More on that in another blog post. Still, if your baby is making noise while I’m trying to learn about social media, I’m going to give you the stink eye…same as I would for a person chatting on a cell phone. Take that shit outside! It’s RUDE.

My favorite session was the Humor Bloggers meet up. There were some really funny gals (and a few guys) in attendance. I was inspired to get out there and get my writing in front of more people. I felt validated that there are in fact more self-proclaimed humor bloggers in the world than the few I have read. Is it just me, or are there only two humor bloggers in Sacramento? Me and Nanny Goats in Panties…. If there are any others, please make yourselves known. We should have a humor meetup and exchange laughs.