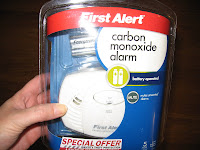 Why do you pay attention to alarms? I just want them to shut off. I really don’t care about their inherent warnings. With the exception of the timer for whatever I might be cooking and my alarm clock, I just hate the noise. Remember when my smoke alarm went off in the middle of the night? My first instinct wasn’t to flee to safety. It was to make that sound stop.

There is a new alarm in my house. For whatever reason, California is forcing people to have carbon monoxide monitors in their homes. So, for the 37 years I’ve lived without one, I’ve just been gambling with my life? Of course, people probably said the same thing when smoke detectors and seat belts became the norm.

Honestly, I will feel kind of silly calling up 911, “Um yeah. My CO detector went off. I know you have real emergencies to deal with, but the instructions told me to call you.” 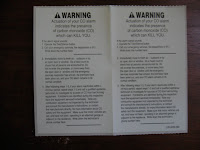 I like how carbon monoxide is so dangerous that you have time to press the Silence button on the device and call the authorities before heading outside for fresh air.

Seriously though, what is the 911 dispatcher going to do? Send out someone to inspect my house? Shouldn’t I just call PG&E? I’m assuming the CO is coming from the gas stove or heater. But of course, I bought one because if I just ignored the law and something happened…I probably wouldn’t hear the end of it.