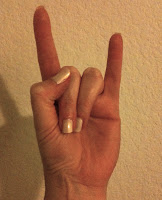 Unless that thing has black tar heroin as a filling and cocaine sprinkled on the frosting, what the hell is going on with that? This is the same guy who remade Texas Chainsaw Massacre, right?

Of course, it all started with the Osbournes. Yes, I know that was years ago, but it was the beginning of the end. Remember when Ozzy Osbourne was bad ass? He would scare the shit out of people biting the heads off small animals. Now there are commercials for minivans with his music. MINIVANS!

Ok, maybe it’s an SUV, but isn’t that the minivan of the new millennium?

I can’t hear Crazy Train without cringing now. Hey, let’s use “Welcome to the Jungle” to sell a timeshare in Costa Rica!

If I ever see Lemmy from Motorhead remodeling a house on HGTV I’m going to have to kick someone’s ass.

>My friend, Maria emails me today:

“Check out this link to Can’t Stop the Music. It’s that movie starring the Village People. Please scroll down to the entry that says ‘Metal guy with leash at audition’.”

It was none other than Blackie Lawless. Front man for WASP.