>Sorry, but I am addicted to the Internet. You know how I know I have a problem? I ALMOST downloaded (bought) the theme to Flash Gordon by Queen.

Seriously. I was in a music buying groove and had to stop myself. I love that I can pick and choose the songs I buy. My collection now includes songs by Aretha Franklin, The Rolling Stones, Junior Walker & the All Stars, The Jacksons, Men Without Hats, and Men At Work. See what I mean? 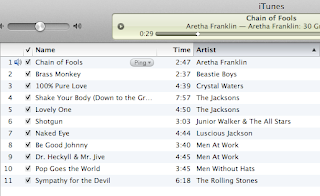 What I thought was interesting is how many songs I know that come from before my time. Apparently, my parents exposed me to quite a bit of soul, disco and of course, the Beatles.

I do remember listening to KFRC quite a bit when I lived in San Francisco. Mostly because well, the music from the mid to late 1990s was crap.

Yeah, I know the music industry is evil and so is the motion picture industry. So, I shouldn’t have bought the music on a day when everyone else is protesting crazy laws both industries seem hell bent on getting through Congress.

While, I didn’t take down my blog or stop using the Internet for 24 hours (quel horror!) I didn’t watch any movies. That was really hard.

I love movies more than I love music. I can go months without listening to music. Ok, maybe days, but I think I watch at least part of a movie every day. Really, that’s who is behind the SOPA crap, right? So why don’t we hit them where it hurts in addition to telling our elected representatives that we are pissed off?