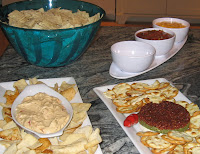 Remember when eggs were high in cholesterol and were banned from meal time?  Then everything had to be fat free, which made red meat evil and chicken the protein of the day.

Then everything had to be sugar free and Equal became a fixture in our coffee and soda.  In the late 90s, carbs became the enemy and bread was shunned while meat was our friend again.  And at some point eggs were forgiven their cholesterol content and found their way back into our meals instead of something to be avoided.

Now gluten is trying to kill us all.  Seriously, a bottle of honey tells me it’s gluten free.  I don’t even know what gluten is, yet I feel like I should stay the hell away from it.  It must be tasty though if it’s suddenly not good for me, right?

Obviously, I’m not an nutritionist, but it seems to me that a little balance and common sense is all we need to consider when we eat.  Of course, that’s easier said than done.

1 thought on “>What am I not supposed to eat this week?”