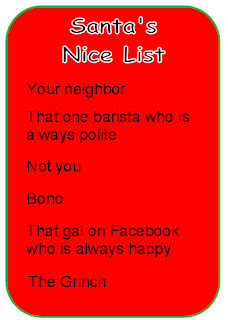 It’s the only explanation. Santa Claus never brings me what I want for Christmas. The only conclusion is that I somehow made it on to the dreaded Naughty List.

The problem is that I can’t figure out what I did to get on that list. Do you have to be friendly to get on the Nice List? I’m not overtly hostile, but I just try to avoid interacting with most people. It keeps my annoyance levels to a minimum.

So what could it be? I don’t chase after married men. I don’t even chase after guys who have girlfriends. At least, not knowingly.  I haven’t knowingly committed any felonies.  I try not to do anything that might get me hassled by the law.

Sure, I make the usual stupid mistakes from time to time, like cutting someone off in traffic, pretending I can’t find the button on the elevator because I really don’t want company, saying I’m sick when I just don’t feel like attending some boring social function, but are these really enough to warrant coal in my stocking?

You know what would be nice? To see the parameters Santa has set forth to achieve Nice List status. I thought there was room on the Nice List for everyone. Did Buddy the Elf lie to me?