I confess. I started decorating for Halloween in mid-September. The bad news is that I can’t find some of my decorations. They are somewhere in our dark and somewhat cavernous storage unit. It’s not that big, but it’s full.

I looked at Target, where I love to buy Halloween decor, but it looked picked over and nothing really caught my eye. I don’t want to spend a ton of money, but I do want it to feel more festive. Plus, I don’t want to replace the stuff that is “lost” because I’m just too lazy to dig it out.

These are files you can find on Etsy, blogs, or other places on the internet. They range in price from $5.00 to $1.00 depending on the complexity of the printable. Basically, you download a PDF, JPG or PNG.  Print it out and put it in a frame you already have. The nice thing is that you have the file so you can print it out as many times as you want. 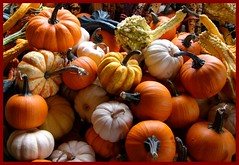 You see these at the grocery store. They cost like 50¢ each. If you’re lucky, they’re a quarter. Grab a few to a bunch of these suckers. Randomly put them in your home…preferably where your little monsters won’t accidentally grab them. Usually, they end up in the middle of the dining table or along a mantel.  You can really put them in any nook and cranny.  The best part? You can leave them through Thanksgiving! 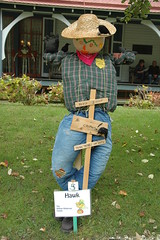 Scarecrow Alley by Mid-Atlantic Center for the Arts & Humanities (MAC), on Flickr

You know you have old clothes laying around the house that you keep meaning to donate. Why not use them to create a scarecrow? Stuff them with newspaper and use a pumpkin or pail or whatever for a head.

You just need to figure out a way to prop it up.  If you live in a good neighborhood, you can just set the scarecrow on the stoop or porch or whatever. If you want it front and center, grab an old chair. A good way to scare the neighbors (and probably yourself) is to prop the scarecrow so he’s looking out the window. Creepy, but it might keep those neighbors you don’t like at bay…or the police showing up to your house unexpectedly. It could go either way, really. 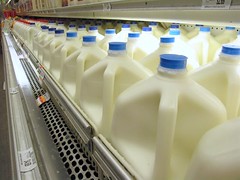 You probably have at least one of these in your home…if not more. Save these when they are empty and grab some of those twinkly Christmas lights as well as a magic marker, boom! Milk jug ghost.  Can’t see it? Click here to read a blog post with better instructions and photos. 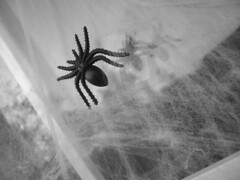 I just love these things. They are usually pretty cheap and also include a fake spider. YAY! You can put them anywhere you need a touch of spookiness. Think outside the doorway box. They can go on TVs and annoy everyone in the house. Dangle them in cupboards and probably scare yourself in the morning while trying to make coffee. There’s tons of fun in them!