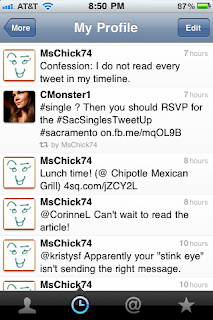 I’m just not much of a joiner. Classes are usually boring. Group activities don’t appeal to me, which is probably why my hobby is best done alone.

One day, I got a mention from a gal who was planning a singles tweetup and wanted to pick my brain about it. Now, let me be honest, I was skeptical at first. I’ve only been to one singles event and it was just weird. Granted, I was alot younger and less sure of myself, but, the more that I thought about it, a singles tweetup might not be a bad idea.

On a rainy Saturday in Elk Grove, I met up with the three women who decided they needed a new way to meet people. What’s really interesting is that they all met each other at the Elk Grove Tweetup. Cassidy McGuire mentioned the idea to Rodney Blackwell who had organized the Elk Grove Tweetup. He proceeded to introduce her to Tazmin Godamunne and Nikki Phipps. Neither of them had ever organized such an event, but decided it was time to take a chance. Cassidy said that she is trying to overcoming shyness. She told me, “If nothing else, I’ll find more friends.”

We all agreed that meeting people seems to be challenging. They had some interesting experiences finding a date without the aid of technology:

Nikki met someone at Burger King. “Worst mistake of my life. I wish I could rewind that one. He just walked up to me and talked to me. After a couple dates, I went You are weird, good bye.”  Pretty gutsy of a guy to just walk up to a chick and start chatting her up without the aid of alcohol…then again he was weird.

Taz met someone waiting get to an oil change in the waiting room and it turned into actual relationship.  Which reminds me…I think it’s been about 3,000 miles or 3 months.

Cassidy had a boyfriend right out of high school, she said, “So I didn’t know how to do the dating thing.”

Regardless, I am going to this event. If no one else shows up, the four of us gals will have a great time at de Vere’s! Which by the way is reason enough to join in on the fun. If you haven’t been down there yet, it’s a pretty cool Irish pub with good food.

If you haven’t rolled your eyes yet and have overcome the skeptical condition so many of us jaded daters have, I’ve listed the pertinent information below:

Sacramento Singles Tweetup
Thursday, June 30, 2011 from 6:00 PM to 8:00 PM
de Vere’s Irish Pub at 1521 L Street in Sacramento
RSVP: http://sacsinglestweetup.eventbrite.com/ or Search for the event on Facebook “Sac Singles Meet Up”
Don’t forget to follow the hashtag #sacsinglestweetup and @SacSingles to see who’s going. Heck, you will already have a built in ice breaker.