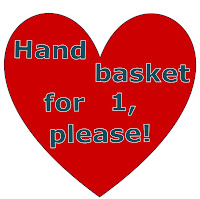 Duped. I’m pretty sure I’m in the process of being duped. First we have the Football Player. I’ve been texting with him for almost 3 weeks now. Every time I bring up the subject of meeting in person, he skirts the issue. I have two theories. (Rule #1) First, he has a girlfriend/wife and is a scumbag only looking for attention from a gal that he’s not getting at home.

Second, he’s actually a horde of frat boys involved in an elaborate initiation prank to string along ugly chicks until they get dumped by them. I’ll admit that’s just my imagination (and probably hormones) running rampant & highly unlikely.

The text messages have been decreasing in frequency lately, so odds are my first theory is probably correct.

Then we have the Short Guy. He’s two inches shorter than me, but he looked pretty hot in his pictures, so I can overlook the fact that I would be towering over him whenever I wore heels. He sent me a wink a few weeks ago. I replied with a message and heard nothing until I put up my new picture. More about that photo later…

His reply was encouraging. He actually wanted to meet, but “had to work this weekend.” So, I replied that we could always do a happy hour during the week. His reply to my reply pissed me off. He broke Rule #2. He claims to be out of the country for the next few months, but wants to meet when he returns. Yeah, right, jerkface. That message (in combination with his crappy grammar) screams scammer or waste of time to me. Why don’t you just ask me for money while you’re at it?? He should have put that disclaimer in his profile. I’ve seen a few guys do it and that’s fine. Better to know before first contact than waste my time and get my hopes up.

So, the photo…basically, my newest experiment is to see how much sex I need to add to my profile in order to increase my number of dates. The photo is very tame by Internet standards, but for me it’s a stretch. Might as well try every marketing angle possible, right? It’s a dog eat dog world out there.  While I’m not a fan of using sex to get ahead in this world, it seems to be appropriate in the realm of dating.

1 thought on “>Online Dating Chronicles: If I’m going to hell, I might as well enjoy the ride”