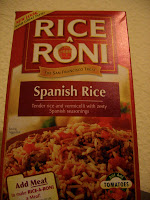 Oh, I’m half way there. Oh, I am certainly living on a prayer. Apologies to Bon Jovi and probably you for getting that song stuck in your head.

So here we are…three months into the six month online dating challenge. Well, the end of three months will officially be on Friday, but I don’t foresee much happening in the next three days.

Maybe that’s my problem with dating, I always assume I know how it’s going to turn out. I tell myself I can just see the pattern of a person’s behavior, but, it’s more like a self-fulfilling prophecy. I expect to be disappointed, so I get disappointed. I would really like to be surprised by a man’s actions instead of going, “Yeah, I expected that. Thanks for playing. What parting gift do we have for our most recent participant?”

Ok, so I don’t actually say that to the guys I go out with, but it sounded better than what I usually say, which is nothing.

And there is no way I’m handing out boxes of Rice-a-Roni to guys who decide they aren’t interested in going out with me again.

What I would really like to do in the next three months is change my attitude about dating and relationships. I have felt a change over the last month. I feel less anxious and more “who gives a shit?”

Maybe it’s because I’m so busy with other aspects of my life, that I just don’t have time to fret about why a guy doesn’t want to meet in person or wonder what about me turned him off so much he can’t be bothered with a second date.

Regardless, I’m happy that my seven month dating drought is over and that I actually went out on that rare second date last week. Here’s hoping that the next date doesn’t take another seven months to show up.