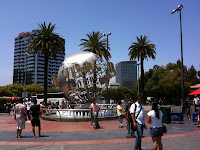 (We love it!)  Sorry to start off by getting a Randy Newman song in your head…

Another thing I love about Sacramento is that it’s a quick flight to Southern California.  It’s easy to do a weekend in the Los Angeles area to see a few sights and then get back to the daily grind.  Just in case you are wondering, the only “celebrity” I saw was some dude from Drop Dead Diva and if my friend hadn’t pointed him out and explained who the dude was I never would have picked him out of the crowd at the Hollywood Bowl.

Which brings me to my next topic.  I love the Hollywood Bowl.  Bugs Bunny and/or Woody Woodpecker didn’t do it justice.  The whole experience was great.  From the quick ride on the shuttle to the casual dinner on a cement bench along a meandering wooded path.  The only minor problem was that I wished I had worn heavier clothes to stave off the foggy marine layer that floated in midway through the show and blotted out the stars.  It would have been nice to know the place is BYOB.  I would have stopped at one of the many area liquor or grocery stores and picked up a cheap bottle of wine to keep me warm much like a hobo sans paper bag.

Then we have the Grove and the City Walk.  My friend had the best comment about City Walk, which also applies to the Grove, “Do people really want a sanitized version of LA?” Of course they do!  People want a sterile version of any place that might be scary or challenging to their sensibilities.  I’ll be the first to admit that I’m guilty of it and it’s probably why I like Disneyland so much.

While at the Grove, we went to the Farmer’s Market next door.  I realized that my 3rd favorite scent is fresh donuts.  The scent of those fried rings of dough is intoxicating.  The gal who sold me the donuts was a bit surly.  You would think someone who was surrounded by so much sugary delight would be happy while at work.  She seemed as grouchy as a DMV employee.  Although, if I worked at the DMV I’d be grouchy too.  Have you seen the cretins that go in there?  Yikes.