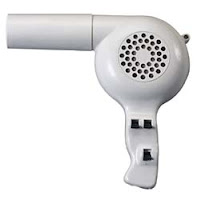 I think it was Eleanor Roosevelt who said that you should do one scary thing every day.  Well, today, that one thing was going to a new stylist and letting her color my hair.  For most women, they stick with their hairdressers until some cosmic event forces them to switch to someone new like when they move to a new city.  My stylist moved to a different salon right after my sister gave me a gift certificate to her old salon.

Now, I really wanted my usual gal to do my hair, but being that the GC was for a color and cut, I couldn’t just pass that opportunity up for the sake of loyalty.  So, I swallowed my fear and allowed a stranger to do my hair.

I also realized that I color my own hair not just because it is significantly cheaper, but because letting someone color your hair takes WAY TOO LONG.  I was in that damn chair for two freaking hours. Apparently, it was worth it because my hair looks gorgeous.  It’s almost as blonde as it was when I was a kid.

You know what is the worst part of being in a salon?  Aside from being forced to sit for two hours that is…those full length mirrors that are planted in front of the chair.  Good lord, every time I glanced at my reflection below the neck, all I could see was my insecurities.

2 thoughts on “>Cause I’m a Blonde, Yeah Yeah Yeah”