>One of the MANY problems with Sacramento the attitude its inhabitants have towards parking. Parking is in abundance here compared with say, San Francisco.

As you may be aware, I have been staying at my parents’ house until I can finally move into my own apartment, of which I am directly in the middle. On Friday afternoon, I parked across the street from my parents’ house, as opposed to in their driveway, which is long enough to fit three decent sized cars. I park on the street because it’s one hell of a hassle to have to move my little Beetle every single time we collectively go somewhere in my parents’ SUV.

Regardless, this afternoon I went out to my car and this note was on it: 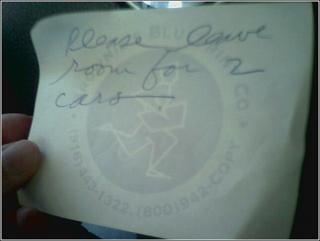 First of all, just because my car is small doesn’t mean you can pick on me.

Second of all, even if I am parked in the middle of two spots you can have your “guest” park halfway in front of your own drive way as well as the remainder of the street space. I wrongly assumed that most people would think of this solution to their parking problem seeing as how they own the driveway and know the person who wants to park infront of it.

I have a problem. I have a difficult time suffering fools. So now, I feel awkward and pissed off. There is some nosy old neighbor (I’m going by the handwriting on the note) out there watching my every move making sure I don’t hog the parking spaces. Ugh.

Why couldn’t they just come up to the house and say, “I’m sorry, but could you move your car? I would like to park in front of my house and your car is inconvienently placed.” Maybe if they would have acted like a true neighbor and an adult I wouldn’t be pissed off. Instead, they passive agressively leave a note.

5 thoughts on “>The Gauntlet Has Been Thrown”